My Ma just turned 60, so what are the kids supposed to do? Treat her to a vacation in Florida!

The planning started many months ago and was originally a cruise. Various ideas were tossed about and it was decided that we would get a house for a week in Orlando and spend the week doing what any family should do in Orlando. Theme Parks, Beach and enjoying the great Spring weather.

It started on Saturday when Amber and I went to MKE to catch the first flight on a two legger. You might have heard that the Badgers had an Elite 8 game on Saturday, but knowing that the flight started early enough where we could possibly land at half-time, all seemed well. That is, until the flight was delayed… We taxied onto the runway exactly two minutes before tip-off. Maybe they have wi-fi on-board? Nope. The length of the flight to Houston left us all wondering if we would get to see any part of the game. Sure enough the flight was a nervous one, knowing that the Badgers would be in a battle with the Arizona Wildcats.

Well, we landed and I immediately pulled out the phone, got it online and tried feverishly to refresh the NCAA March Madness Live app for an update. Badgers were up with 8 minutes to go! There was an Arizona fan in the seat directly in front of me asking for updates as well, so I spent the next 15 minutes waiting to deplane giving updates to the many fans in the area.

Seeing as the connection was on-time and hop-skip-jump away, as soon as we got off we booked it to our next flight. Amber and I were huddled around my phone streaming the game on the Houston Aiport Tram when Dekker hit his (now famous) three pointer to seal the game. After a brief excited celebratory yell, I put the phone away as the rest of the passengers (probably noticing my Badger shirt) kindly responded with a smile/laugh. The game was going into the books!

We made the next flight, landed and Gail picked us up in a not-so-sunny Orlando at 11pm. Amber’s checked baggage didn’t make it due to the quick layover. It was expected to be in the next morning. My mom was coming in shortly after midnight, so we all hung out while we waited.

The next day was fairly lazy with swimming in the attached lanai, grocery shopping for the night’s birthday celebration, playing games, more games, and more games.

Day two brought a day in Universal Studios Florida theme park where many-a-time was spent in line for the various attractions. My particular favorite was The Mummy. I also will admit to buying an Elder Wand from the Harry Potter world… The 10 year old inside of me made me do it. The evening brought more games and swimming.

Day three was Beach Day! A trip to Clearwater Beach in Tampa was a little bit of a long haul, especially with traffic. The beach was, however, amazing. I have never seen a beach with that white and fine of sand. Water was fairly chilly but considerably warmer than any salt-water swim I have ever experienced. Sun was so bright that I had to buy a pair of sunglasses… which is saying something. I manned the grill for bruschetta and kabobs. Again, more games afterwords.

The next day brought about the return to the airport. Unfortunately, our first flight was canceled and we ended up spending several hours in the airports before finally getting into MKE at 10pm. Madison came an hour and a half later.

I don’t need to say it, but it was a terrific vacation to sunny Florida. 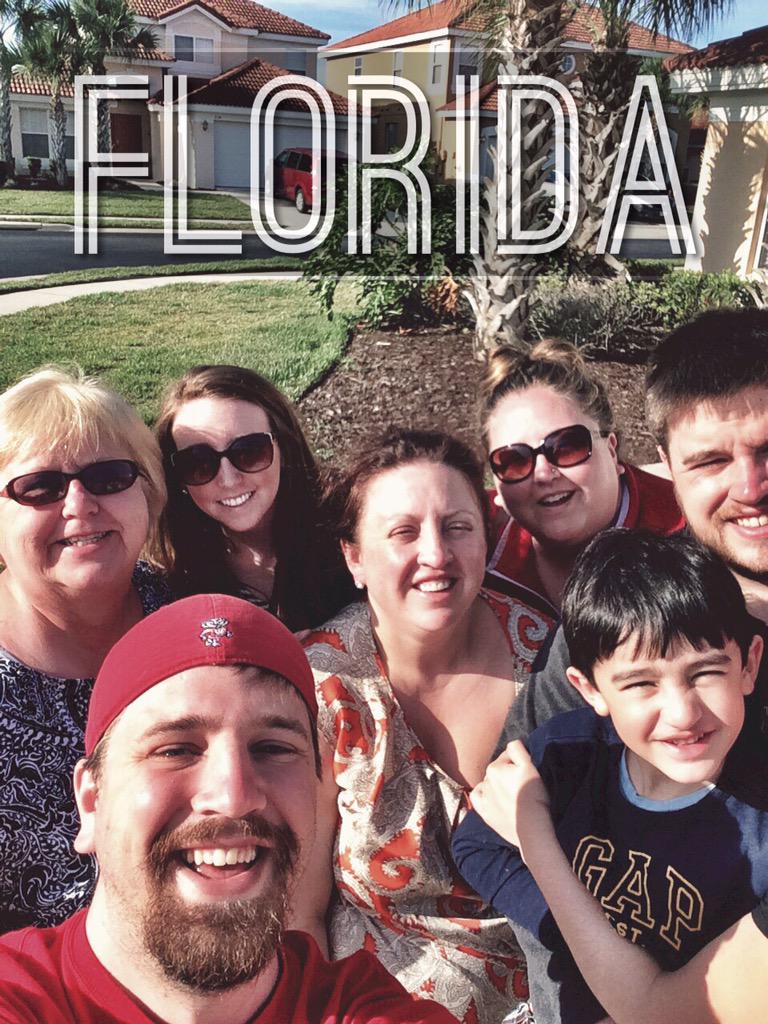